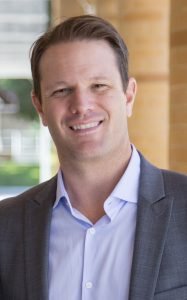 The newest community from MacFarlane Barney Development in Downtown Fort Myers on the Caloosahatchee River, Prima Luce on the Waterfront is a luxury two-tower high-rise condominium community currently in the pre-sale phase of construction.

“I’m happy to be joining the team and excited to have the opportunity to contribute to the success of Prima Luce on the Waterfront,” Barney says. “Prima Luce will be the first newly constructed community in Downtown Fort Myers for the past decade, and I’m looking forward to helping continue the positive growth and development of our Historic River District.”

In addition to working with the Prima Luce sales team, Barney’s responsibilities will include researching and cultivating future financial and business opportunities for MacFarlane Barney Development as it broadens its scope of regional development, particularly in regard to attainable and affordable housing throughout Southwest Florida.

Originally from Milford, Conn., Barney relocated to Florida in 2008, where he spearheaded marketing efforts and coordinated patient-care activities for a health center in Boynton Beach under the title of Director of Marketing and Admissions.

Upon his move to Fort Myers in 2012, Barney began working with Downtown Fort Myers developer Robert MacFarlane as Director of Marketing and Sales for one of MacFarlane’s master planned golf course communities. A licensed Realtor®, Barney has also worked on Sanibel Island with John Naumann & Associates, representing buyers and sellers of developed and underdeveloped properties.

The most recent position Barney held was Director of Sales for Campo Felice Independent Living, a MacFarlane Barney Development transformation of a vacant Downtown Fort Myers hotel into a senior living community, which was sold to partners in April 2018.

“The working relationship that Jeff has developed with Bob MacFarlane makes him unquestionably qualified for this position,” said Dawn Geyser Chalanick, Director of Operations for Prima Luce, LLC. “As Bob MacFarlane has continued to increase MacFarlane Barney Development’s scope of work and offerings, Jeff has grown with the company, and his real estate experience will help carry Prima Luce to record-breaking sales and more-than-satisfied residents.”

Stop by the Prima Luce sales center to meet Jeff Barney, Prima Luce’s new Vice President of Business Development, or send him an e-mail at jeff@primalucelife.com.

The Prima Luce Sales Center – located at 2631 First Street in Fort Myers, Florida 33916 – is open Monday through Saturday from 10am to 5pm, and on Sundays from 1pm to 5pm.